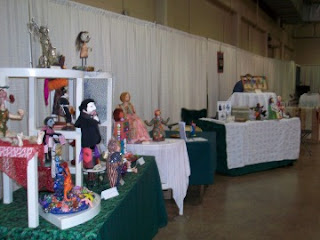 There was so much going on at Winter Fair.  It was crazy fun for everyone.  The invitation to Winter Fair came three months prior to the event.  The Guilded Lilies were invited to not only stage a booth for the Guild presentation, but also ask to engage the public in a Make it and Take it project.  Committees and volunteers were formed at the September meeting, and it was a whirl wind of hard work up until the show.
The Guilded Lilies Display Booth

You may not know that you were represented at Winter Fair but you were!  Miss Vicki had a great many fabulous dolls from Christmas exchanges and gifts that were whisk away from her display cases and put on display at our booth.  Other dolls were gathered from our guild members and so the display showed a wide range of doll artistry. The exhibit showed off the use of mixed media, skill, and design. The display was very well received at the Winter Fair art show.  The thrill was raising the awareness level of the unsuspecting.  The volunteers that worked the booth also made contact with artist that had know idea that there was a club in town, and were delighted to sign up for a one time news letter to become a possible member.  It is safe to say that we truly raised the image of Doll art in the eyes of the general public and connected with many new potential Lilies. 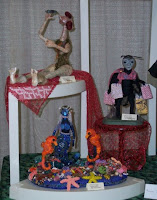 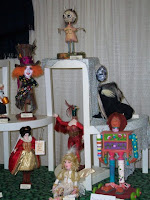 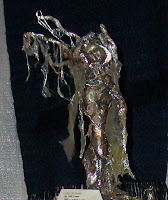 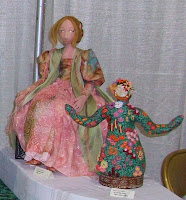 Along with the display of dolls several of our members demo as a way to invite conversation and attention to our booth.  It was awesome!  We engaged many conversations, sold pattern books and kits. We showed off the members that have had "Cover Girl Magazines" and dolls to match and bragged on how wonderful all of our members were in the club.
Art Collage Pin a Hit! 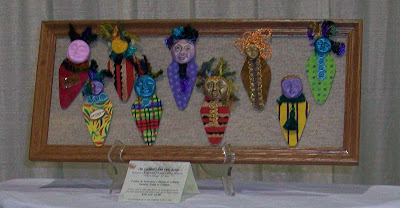 Now to elaborate on the Make it and Take it table.  It was a hit!  The table was a flurry of activity.  Many extra kits were sold as a result of the mini class with the "Art Collage Pin"  These kits and class took a tremendous effort to put together in such a short time period.  Cyndy Sieving Designed and wrote the directions for the kit.  Cathy Barnes scheduled the workers. Gigi and Cynthia headed up the committee that orchestrated the assembling of the kits.  However with out the help of the club, making the molded faces, cutting fabric, donating items and assembling this project it would have never been completed in time.  Gigi and Cynthia commandeered just about everyone they could at one time or another to pull this project together.  Theses kits are also going to be used at Artistic Figures In Cloth "demo" night and sold at the Guilded Lilies table. 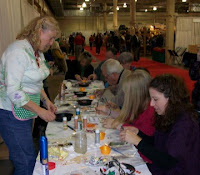 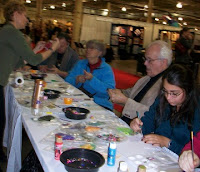 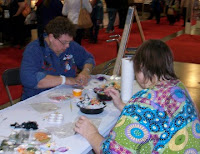 ﻿ ﻿﻿﻿﻿
The Icing On the Cake
Ohio Design of Arts and Crafts Museum, the promoters of Winter Fair, were totally floored by the Make it and Take it project.  They loved the effort put unto the project, the inviting way the table looked and how well it was received by the public.  ODAC also came to the booth and expressed that our booth was really eye catching.  I told them we did our best in a 3 month notice and we would love to be invited back. I think that Megan's big smile and the words most definitely were heard!
﻿
﻿
Posted by Cyndy Sieving- Reporter at 8:25 AM