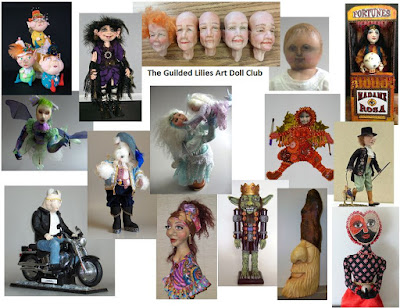 We meet on the 4th Saturday of the month unless there is a special holiday or Guilded Liles event going on during that time. We meet at the OSD

OHIO SCHOOL FOR THE DEAF - OSD
500 Morse Road,  Columbus, Ohio
Located west of State Route I-71. Take the Morse Road exit off of Rt. 71, go west on Morse Road. Turn off Morse onto the school campus. Drive past the security building and take the left hand road going around the outside of the campus.  We meet in the Conference Center or the Cafeteria at the back end of the school grounds.

Meeting time starts at 10:30am on Saturday we break for lunch (sack lunch) and have a workshop right after lunch.  Membership is $25.00 per year which includes all workshops given by members after each meeting.  Your first visit is free and are permitted to take workshop to try us out to see if we are a good fit for you.

December 1, 2 and 3rd - check us out at Winterfair

Posted by Cyndy Sieving- Reporter at 8:21 AM